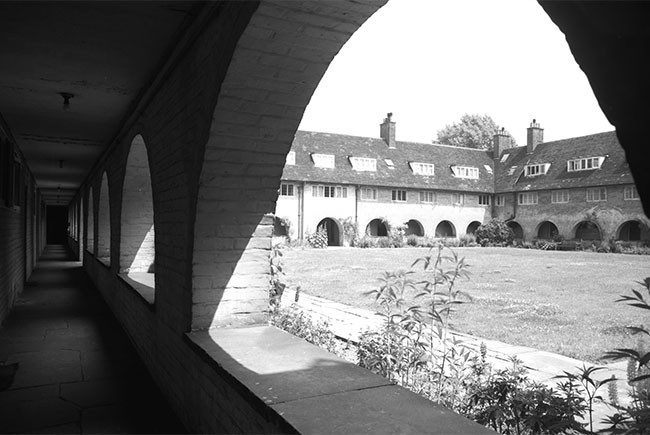 This building visit to Waterlow Court designed by Ballie Scott, will be led by Adam Khan of Adam Khan Architects in conversation with Alvaro Velasco, AA PhD candidate.

Waterlow Court formed part of the Industrial Dwelling Company involvement in Hampstead Garden Suburb development in North-West London. Open in 1909, the building is designed in the Arts and Craft style. Behind its timber-framed exterior elevation the building is organised around an arcaded cloister. Though traditional in its Neo-Tudor language, the houses are composed by a skilful design of Baillie Scott in which he developed new solutions in typological level. The Court includes a wide variety of dwelling types, from small terraced homes to stacked apartments. It was made up of fifty three- to five-room flats, with, originally, a communal dining area and was intended for the new breed of single working women who would not be able to keep servants, but would surely benefit from some degree of co-operative living. As well as a the communal dining area, there was a communal kitchen, a small common room, and servants’ (including a housekeeper’s and porters’) quarters. There was also a bicycle shed for these progressive women, and allotment strips for them to grow their own flowers.

Adam Khan Architects was founded in 2006 and aims to address key issues of our time: social inclusion, sustainability and the vitality of public space. The practice’s design methodology is based on careful study of context, collaborative working methods and an active process of client and user engagement. Awards include NLA Award: Housing 2018, RIBA Award: National 2014, Graham Allen Award: Conservation and Design 2016 and RIBA Award: National 2014 among others.