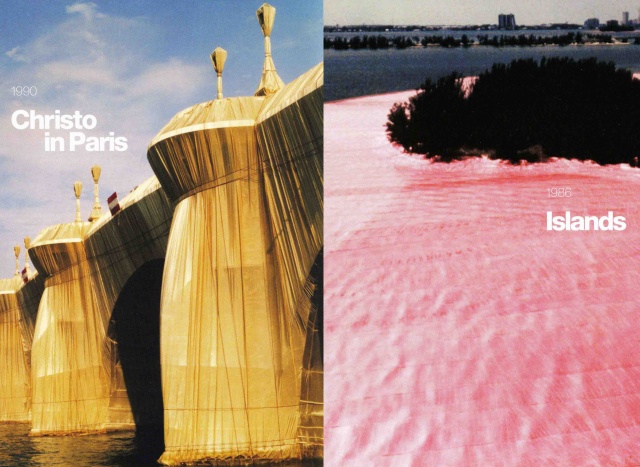 Membership and the AA Cinema invite you to join us for the second in our trilogy of film screenings on artitsts Christo & Jeanne Claude.

Islands explores the artists’ fusion of culture, environment and politics. Christo and Jeanne-Claude’s fight for permission to surround eleven islands in Miami’s Biscayne Bay with 6.5 millions square feet of bright pink fabric, interwoven with struggle to wrap the Pont Neuf in Paris and the Reichstag in Berlin.
Albert Maysles, David Maysles and Charlotte Zwerin/ 1986, 57 minutes

Winner of the Grand Prize at the Amsterdam Film Festival and Best Cinematography at the Sundance Film Festival, Christo in Paris explores Christo’s escape from Bulgaria, his early years as a struggling artist, his romance with Jeanne-Claude and the fulfilment of ten-year obsession: the wrapping of the Pont Neuf in Paris.
Albert Maysles, David Maysles, Deborah Dickson and Susan Froemke/ 1990, 58 minutes

The event is free and is open to all AA Members & Students. Seats allocated on a first-come first-served basis. Complimentary drinks & snacks will be served.