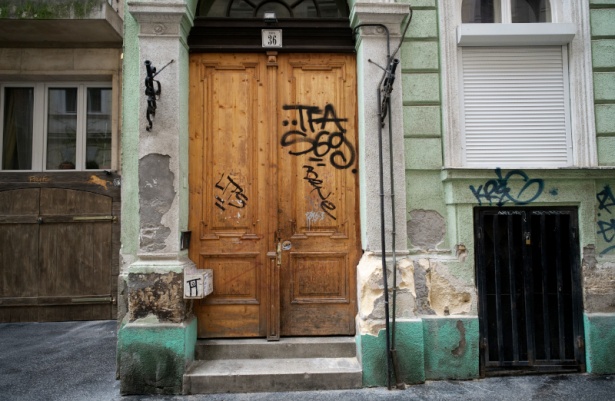 Please join us on the afternoon of Saturday 14th November in the AA Front Members’ Room for a gallery talk by photographer Nigel Swann of his exhibit ‘The Yellow-Star Houses of Budapest’. Swann will also be joined Dr Gwen Jones of the  Open Society Archives, Budapest.

All welcome, complimentary drinks and refreshments will also be served for more information please e-mail events@aaschool.ac.uk

During 1944 all Budapest citizens defined as Jews by the race laws in force were obliged to wear a yellow star, and to live under curfew in a designated house also marked with the yellow star. Across the city, there were almost 2,000 such yellow-star houses; apartment blocks which accommodated around 220,000 people.

Many of these houses were built during the patriotic, optimistic construction boom of the 1880s and 1890s, others are early Art Deco masterpieces, while later buildings were the pioneering works of interwar Bauhaus disciples.

The yellow-star houses were unique to Hungary and Budapest and although around 1,600 former yellow-star houses are still in residential use today, their history was largely unknown until early 2014. Barely a handful of archival photographs of yellow-star houses remain – Hungarian Jews had had their cameras, radios and bicycles confiscated in April 1944.

Photographer Nigel Swann documented Budapest’s inner city districts over a ten year period, unbeknown to him at the time many of the houses he photographed were former yellow-star houses. When the list of yellow-star houses was finally published in 2014 on yellowstarhouses.org he returned and re-photographed these significant locations.